The story of Polly the Parrot brought to the UK by Gabriel Charles’ Parents-in-Law, Wilfred and Vera Carter of Middlesbrough, UK (deceased in 1970 and 1979 respectively)

It was my parents’ first visit to the island.  They stayed for six months between 1967 and 1968.  My family had now moved from the country house in Edmund Forest to a bungalow on Victoria Street in Soufriere town.  A young fledgling was found by labourers near Mount Gimie.  It had been shot and sustained injuries to its beak.  My father (Wilfred Carter) built it a cage and nursed the bird back to health by feeding her on bread and milk and local fruits that were in season. The bird was unable to feed on its own and was hand-fed initially. 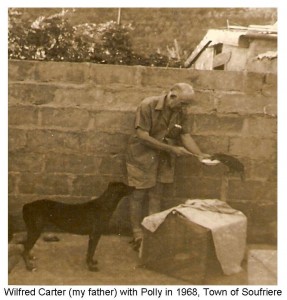 My mother, Vera Carter always dreamt of having a parrot. She idolised an aunt of mine who I visited as a child who owned a parrot brought as a gift by an uncle who was a sailor.  A formal application was made to the Government of St Lucia requesting permission to take the bird to the UK. As there was no legislation then or conservation campaigns the response was favourable.

Polly the parrot travelled to the UK with my parents on the Geest Banana Boat in 1968 an approximate 11-day voyage. On the ship Polly was released from her cage in the bathroom for exercise. Polly got lots of attention and fruit from the crew. 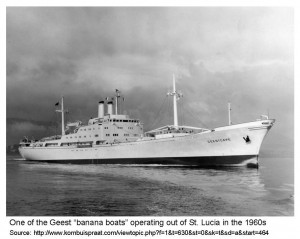 Polly settled in nicely and was kept in the kitchen because it was the warmest and sunniest room in the house.  Polly was let out occasionally in the house for exercise but got up to mischief.  In the summer Polly spent a lot of time out in the garden in her cage and often got cross at the wild birds that visited the garden.  On very hot days she was sheltered by an umbrella which she shredded to bits eventually, only leaving the frame.

Polly had a bubbly personality or “birdality” and was very talkative. Polly was taught to speak and learnt many words and phrases and loved to whistle. She even managed to fool the gas meter reader into thinking that someone was at home on one of his visits.  Every time he rang the bell Polly said “Hello!” On the next visit he said that no one came to the door although they responded to the bell.  My mother told him she was out and it was the parrot.  He did not believe her so she took him to meet her.

Some of her phrases were;

My father died in 1970.  After my father’s death and prior to 1976 I visited my mother during the summer.  That is when I saw Polly for the last time. 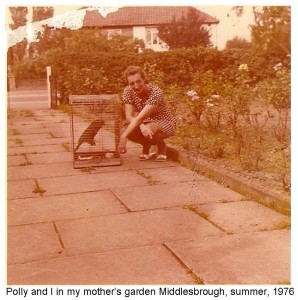 My mother (Vera Carter) looked after her for some time but she found the bird grew heavy and difficult to manage on her own. She finally decided that it was not in Polly’s best interest to be looked after by someone who could not give her a better of life so she donated Polly to Steward Park in Middlesbrough, the birth place of Captain Cook.  Polly loved children and human company so her time at the park must have been a happy period for her.  She would come off her perch and come down to ground level when children visited.

The park was run by the Council and a special event was held featuring Polly.  This caught the attention of officials at the Jersey Zoo and a request for her transfer was made. I am not sure what happened next; Paul Butler will be able to fill in the gap. I am not sure if Polly is still alive, was male or female or whether there were any offspring.  I remember the birds Lucy & Oswald spending the night at our home at Entrepot and that the girl who named them was awarded a trip to the island with her family.  A dinner was held by Sir John Compton in their honour.

The following are pictures from the 1989 handing over ceremony of Lucy and Oswald, captive-bred St. Lucia Parrots, by the Jersey Wildlife Preservation Trust (now the Durrell Wildlife Conservation Trust) to the Government of Saint Lucia.  The ceremony took place on the grounds of the Gabriel Charles Forestry Complex at Union, Castries, St. Lucia. 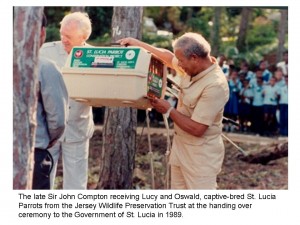 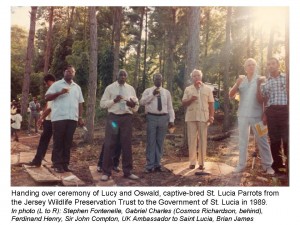