Robert Devaux was a household name in conservation, natural and cultural history for as long as I can remember.  I think I first met Robert when I became involved with the St Lucia Naturalists Society when he attended meetings of the Society. I would run into him when we convened our executive meetings hosted at the Saint Lucia National Trust headquarters that were housed at the time in one of the old military buildings at Vigie.  He was the Director of the Trust in these days and I remember him as a fountain of knowledge on the history of the island, imparting this knowledge with scientific-precision.  A common sight was Robert driving his blue pick-up with a lawnmower in the back, making stops at various SLNT historical sites to help with upkeep, testament to his very hands-on commitment.

I had one of those laughable experiences with him many years ago (somewhere between 1993 and 1995) while I worked with the St. Lucia Forestry Department.  A small group of us had gathered at Fond d’Or including Robert, to look at the feasibility of development of eco-touristic activities in the area.  Robert had brought along his small inflatable dingy figuring that one of us would accompany him, paddling up the Fond d’Or River for a closer look at the river to consider suitability for water-based recreation.  One look at the dingy told a story that it might have seen better days, with its collection of irregular patches all over the skin, not to mention the not-too impressive hand-pump he had tucked in a corner in the boat.  Robert then called out for volunteers; not sure what compelled me but I proceeded while the others remained on terra-firma discussing matters at hand.  We pulled away and started paddling upriver making slow progress when some distance away in mid-river the boat began collapsing around us.  The team on land no doubt heard our shouts of dismay and of course began to collapse in laughter at the sight of the two of us; Robert yelling to me to paddle harder while he furiously worked the hand pump to breathe life back into the dingy…with little luck.  As we approached the shore in what was now a limp, sinking blob of rubber, our colleagues were in stitches.  We made it back almost under water with Robert and I red-faced with exhaustion and embarrassment.

My last contact with him was just days before he passed away when we exchanged emails and spoke on the phone about an art project I had been working on and wanted his advice.  I had remarked when I spoke to him on the phone that I had not seen him for a while and asked how he was doing…he just replied in his usual calm manner something to the effect that he had some downtime, saying “well…you know how it is” suggesting that age was catching up.  I asked that he sign my copy of the book A History of St Lucia, he recently co-authored with Dr. Jolien Harmsen and Guy Ellis.  He agreed that I drop the book off at his daughter’s place of business; that was Monday…by the following day he had passed; according to his wife Pam, he received the book but never got to sign it.  Only then I learned he had cancer.

This excellent tribute below was written by Tony Williams, posted on his Caribbean Book Blog on 19th April, 2013 at http://caribbeanbookblog.wordpress.com/2013/04/19/robert-devaux-passes-away/.  It is posted here with Tony’s permission.

Robert J. Devaux, possibly one of the foremost authorities on the history, ecology and culture of St Lucia, passed away on Tuesday (April 16th 2013) at his home in Becune, Gros Islet in St Lucia after a short battle with cancer.

Born in Castries in 1934, Mr Devaux devoted most of his life to studying and documenting the history of St Lucia and the island’s natural habitat and ecosystems, as well as its rich and diverse cultural heritage. He was a strong advocate for the preservation of the island’s archaeological sites and its historical relics. Along with other local environmentalists he played a major role in helping to raise public awareness of the importance of environmental conservation and the protection of St Lucia’s unique ecology, wildlife and and landscape.

A former field engineer, Mr Devaux was an avid participant in archaeological digs. He is credited with re-discovering numerous   historical sites, including the ruins of early Arawak and Carib settlements and the forest hideouts of the Brigands, former runaway slaves considered to be the island’s first freedom fighters because of their resistance and rebellion against the brutal oppression of French and British colonists and planters in the mid to late 18th century.

On the basis of his research and findings, Mr Devaux posited the view that the Arawaks, St Lucia’s original settlers, thought that Yokahu, their God of Fire, was asleep in the bubbling pools of the island’s world-famous Sulphur Springs. Located in the south-western town of Soufriere, the Sulphur Springs are the Caribbean’s only drive-in volcano and the hottest and most active geothermal area in the Lesser Antilles.

Mr Devaux also concluded that the Caribs, who followed the Arawaks up the Eastern Caribbean island chain, would sacrifice virgins to appease their supposedly angered God during periods of intense hydrothermal activity at the Sulphur Springs.

In 1961 Mr Devaux founded the St Lucia Research Centre, producing dozens of research papers on a wide range of topics usually at the request of the government and corporate and private entities seeking (occasionally obscure) details of St Lucia’s past.

He was a former director of the St Lucia National Trust. Under his leadership and tutelage the organization was able to devise many practical ways to enhance the preservation of St Lucia’s natural, historical and socio-cultural heritage.

Some years ago Mr Devaux had planned to open the island’s first real museum in the capital, Castries. Unfortunately, his plans fell through due to lack of government support.

Over the years he wrote and published several books and articles including the monumental St Lucia Historic Sites (1975). He is also the author of They Called Us Brigands: The Saga of St Lucia’s Freedom Fighters (1997), A Century of Coaling in St Lucia (1975) and History and Analysis of Coastal Processes at Pigeon Island (1993). 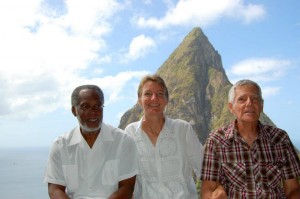 He co-authored a History of St Lucia along with Dutch-born Jolien Harmsen and Guy Ellis, one of St Lucia’s best known and longstanding journalists, and a co-founder and former editor of the Mirror Newspaper. Jolien Harmsen who currently resides in St Lucia, holds a PhD in Social History and has worked as a newspaper reporter and radio correspondent. She has written several historical studies. Hailed as the “first-ever detailed and comprehensive record of St Lucia’s turbulent past,”History of St Lucia was published in 2012 by Lighthouse Road Publications. It was originally commissioned by the British publisher MacMillan Caribbean, whose efforts to produce it were derailed by the 2008 world economic crisis. However, the three authors decided that such a vitally important book simply could not be abandoned at that stage and, given the tremendous amount of work that had already been put into the project, they decided to produce the book themselves.

In 1991 Mr Devaux was awarded an OBE for his significant achievements and outstanding service to his country. In 1993 he received a Paul Harris Fellowship Award from Rotary International and the Rotary Foundation. He was inducted into the St Lucia Tourism Hall of Fame in 1996. In 1998 he was the recipient of the M&C Fine Arts Award for Literature.