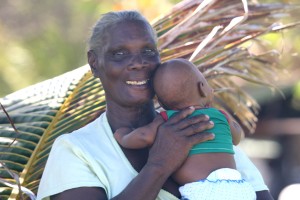 A tribute by Yves Renard to a grass-roots conservationist Magdalene ‘Magda’ Nelson who understood what sustainable use of the natural resources meant.  The main resource upon which she and fellow community members in the Aupicon area in the south of Saint Lucia relied upon was the nearby Mankote Mangrove.  For many years the Forestry Department and other partner organizations (ECNAMP, now CANARI, the Fisheries Department) worked with the charcoal producers such as Magda to put in place management regimes to allow for sustainable harvest of mangrove forest while protecting the integrity of the ecosystem.

Magdalene Nelson was buried in Vieux Fort on Monday 25 March 2013. Magdalene was not a fashion designer, she was not an environmental activist, not a celebrity; she was a charcoal burner, and a hero in her own right.

Over the past 30 years, Magda, as her friends knew her, has been the de facto principal caretaker of the mangrove forest known as Mankòtè, in Vieux Fort.  Long before environmental concerns became popular and issues like climate change were recognised by politicians and international organisations, Magda knew that environment and development have to go hand in hand.

In the early 1980s, Magda was an active member of the group that worked with the Forestry Department, the Department of Fisheries, the National Trust and ECNAMP (which later became the Caribbean Natural Resources Institute – CANARI) to preserve the Mankòtè mangrove, her main source of livelihood, the forest from which she produced charcoal. She knew very well that, if charcoal production had to be sustained, the mangrove forest had to be managed.

Working with scientists and foresters, Magda and the other members of the group designed a system that would permit the continued harvesting of trees, in ways that would allow the mangrove to regenerate. Nobody spoke then about “sustainable development”, but Magda, Mr Reece, Mr Simon and the other charcoal producers in the Mankòtè mangrove had made their production sustainable. They produced and sold more charcoal and the forest was being protected. 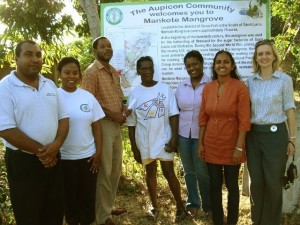 Magda with natural resources managment specialists from UWI-CERMES, the SMMA, the SLNT and others

Magda was a true teacher. In the past thirty years, she has guided many groups of students through the mangrove, she has explained the technique of charcoal making to tourists and she strongly believed that this small patch of mangrove could become a visitor attraction. All during that time, she was part of every project, every effort to preserve the mangrove while making sure that it brought benefits to her and others in the community.

All those who have worked with Magdalene Nelson have deep respect for her work and for her life, as a true pioneer of conservation, someone who dedicated so much to saving a small mangrove forest. She is now with Gabriel ‘Coco’ Charles, Allan ‘Kaf’ Smith and the few others who knew, long before it became fashionable, that our forests, our reefs and our rivers are sources of life and livelihoods, without which development cannot be sustained.