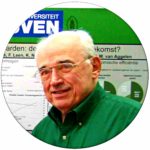 This interesting note was shared via e-mail by Rolfe A. Leary (PhD) who is a retired Research Forester residing in St. Paul, Minnesota, USA.  Rolfe was Gabriel Charles’ counterpart in the first USA Peace Corps (PC) group in St. Lucia; the 4th PC group to go out from the get-go.  During his time in St. Lucia in the early 1960s he resided at the now old forestry house at Edmund Forest (within the Government Central Forest Reserve) with Gabriel and his wife Margaret.  Rolfe was back in St. Lucia in the 1990s volunteering with an NGO, Compatible Technology International, which had secured a grant from Weyerhaeuser Family Foundation to develop hand papermaking skills in St. Lucia.  In about 2000 or so he brought Finola Prescott and Kenny James to Minnesota for a couple weeks to learn hand papermaking.

Edmund Forest is the western region of the Central Forest Reserve A and was named by William G. Lang, St. Lucia’s first Supervisor of Forests, after the forest ranger who took care of that area.

Rolfe (pictured in 1963 on the road to the Moule-a-Chique Lighthouse) writes about the Edmund Forest house (in the Central Forest Reserve near Mt. Gimie) and his visits to St. Lucia over the years.

Edmund Forest house in the early 1960s just after construction 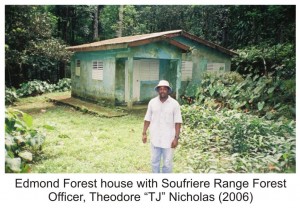 Next time I saw the house was during our family visit in 1986 or 7.  By then the place was not occupied, but still livable — we went inside to check it out.  The last picture was taken by Carol Watkins (pictured below) in 2006.  Carol was a teacher trainer in our group and was returning for a visit.

I gave her two pictures — one of the road bouldering crew I had taken in 1961, and another of Lucille (cook), and two workers (Clavence and John – sorry don’t know their last names).  Carol took the picture through Fond St.Jacques and asked everyone she met if they recognized anyone in the photo.  Apparently there was keen interest in the photo (partly because all the workers were barefoot!) but there was only one person in the image of workers that anyone recognized.  He had died 5 years earlier (2001) but his wife was still living there — and they had 5 daughters, one of whom Carol met during her outing.  It was a very nice thing for Carol to do and she wrote up a splendid report complete with pictures of lots of folks — including some Forestry employees — looking at the pictures.” 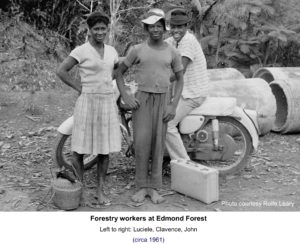 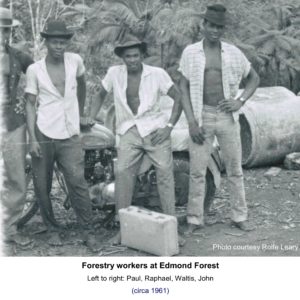 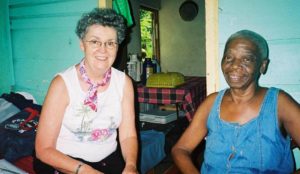 Carol Watkins, US Peace Corps Volunteer to St. Lucia (1961-63) trying to identify the men in the road crew photo with relative at Fond St. Jacques in 2011

Leave your comments below!!!